As a pizza loving NYer, I was a little hesitant to place an order for delivery with Pizza Mia tonight. It’s been rough finding a decent slice here so far, and I doubted that tonight’s meal would be any different than the other fails thus far. It was, however, pouring rain, 8:30pm, and my boyfriend and I had both just gotten home from work- too hungry and tired to think about cooking or going out.

Having seen a post on Facebook a few nights ago about Pizza Mia and the fact that they deliver in this area, we decided we might as well give it a shot. We had ingredients to make salads to go along with our pie, so we went ahead and called in our order after trying to place it through their online ordering system which did not work properly.

We ordered a small pie; half cheese/sauce and half veggie deluxe with meatballs. The veggie deluxe included onions, green peppers, artichokes, mushrooms, 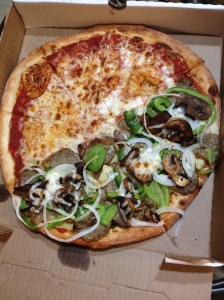 tomatoes and spinach. After printing out a $3 coupon from their website, the order came to around $15.00- quite reasonable in my opinion. 30 minutes later we heard a knock at the door and were pretty psyched that even in the torrential rain, the delivery time was that quick- and that the driver easily found our somewhat hard to find front door around the back of the building we live in. We gave him a $20 and sat down to eat.

Though it wasn’t exactly hot anymore, it was still mostly warm and we were hungry enough that we didn’t really care. I took my first bite. WOW! What a totally pleasant surprise. This is not Florida pizza! This is actually pretty NY-y! How exciting. We will definitely be repeat customers. Thanks Pizza Mia!