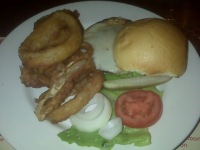 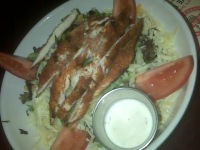 Two friends were here visiting from the burbs today and we wanted an easy place to go have lunch…the requirements were: nearby, a/c, beer, sandwiches and salads. Easy enough. Copperfields is just a few blocks from my apartment and since I’d never been in before we thought it sounded perfect for what we wanted.
My first reaction walking in was to turn around. There was one person at the bar and 2 people sitting in a booth in the restaurant. I worried that this was a bad indication, but my friend pointed out that it *was* 3:15pm on a Tuesday and what did I expect? So, okay. We sat down.
Typical bar food menu, with a pretty extensive beer selection. I had a grilled portobello with swiss and onion rings, my friends had a chicken sandwich and a santa fe salad. Everything was fine. Nothing was remarkable. The onion rings, while hot, crunchy and with nice thick rings of onion (not chopped up mush) were so super greasy that napkins between bites were necessary. The roll on my sandwich was very eh, and could have easily upgraded the meal if it was replaced with a fresher, tastier one.
The service was friendly but very slow. By the time we left (an hour and half later), there were 3 full booths and about 6 people at the bar…and in her defense, she was the only one on the floor…maybe they should have a waitress AND a bartender instead of making her do the job of 2 people. That said, we were pretty happy to have a leisurely escape from the humidity and 90 degree weather outside.
Will I go back? Probably not. Would I tell you to avoid it? No, it’s fine- especially if you like beer.