It was a special day today, my beloved Grandma’s 95th birthday! To celebrate, My aunt took; me, my cousin, her boyfriend, and of course G’ma to have lunch at Le Perigord in midtown. I read some mixed reviews online and learned that it’s a 45 year old, traditional, French restaurant that is well loved among the older generation, but is not particularly popular with the under 50 crowd. Always excited to try something new, (especially when I am being treated by someone else, thanks Aunt Roberta!) I looked forward to forming my own opinion about it. As far as I’m concerned, any restaurant that can survive 45 years in this tough city must be doing something right. 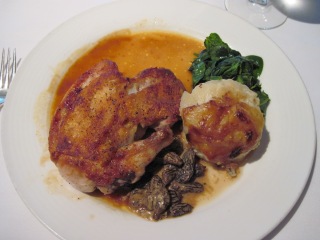 When we arrived, there was only one other table of patrons there and plenty of waitstaff on hand. The atmosphere is definitely traditional French; white tablecloths, white plates and light green chargers, polished silver, with lovely floral displays of forsythia and gorgeous roses. There is nothing at all trendy about this place, and there shouldn’t be. It is truly a taste of what classic, refined NYC once was, and it’s one of the few that remain unchanged. This is not a place to come with a group of friends, but your grandparents? Absolutely.
The waiters were neatly dressed in tuxedos and were slightly rude at first. Apparently changing a reservation from 4 people to 5 was a huge inconvenience to our waiter. Being that the whole entire restaurant was empty except for 2 other people, I thought his reaction was a bit dramatic. Also off-putting was his snarl at my aunt who dared to interrupt him with a question while he was trying to tell us the specials. He actually said, “If you would wait until I finish…” How dare she! The nerve!  Luckily, my multilingual cousin was able to win him over with her impressive fluency in his language. Thank God, because I think he was about to snap. Way to go Steff, you saved the day! From that point on, he treated us beautifully, almost like family- and it made for a great meal. 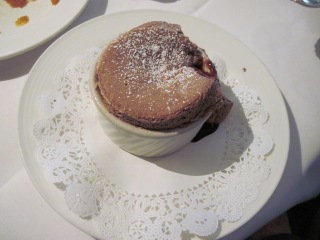 We were given a choice of baguette or brioche, and  both were delicious and very fresh. I started with the little neck clams, which were very good- but very simple with just lemon and a shallot vinaigrette to top them with. For my entree I had the roast chicken with morrels (the best part of the whole meal), spinach and potato gratin. This entree was not exciting or bold but it was actually refreshingly simple. In a city where all of the chefs try to out-invent each other in a competition of creativity, this was just good food. No frills, no pomegranate caviar flan, no macadamia brittle prawn flambe, just seriously good food. Exactly the kind of food that Julia Child would have loved. Loads of butter, loads of wine and liquor, top quality ingredients, old trusted recipes.
The desserts were plentiful but only so-so. The chocolate souffle that we ordered for the table was tasty. What hot-out-of-the-oven chocolate item is NOT tasty? But, it was really not a souffle. It was something else more like a pudding cake. Or an undercooked pudding cake. We also tasted the chocolate mouse with Grand Marnier whipped cream, the caramel apple tart and the berry tart and all were good. Not fabulous, but pretty good.

Overall, the company I was with made this into a very memorable lunch, but the restaurant itself was not my favorite. I would not, however, hesitate for one second to recommend it to others- especially if you like the flavor of old NYC history. I guess the truth is that while I appreciate a good roasted chicken with a little history on the side, I really do prefer the macadamia brittle prawn flambe and a little trendiness when given the choice.