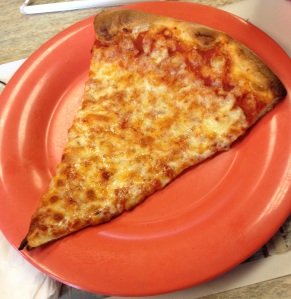 As a native NYer, I have been avoiding pizza since I moved to Florida for fear that a food so near and dear to my heart would be so poorly represented that it bordered on criminal. A few people I know have strongly recommended a couple of places so I have begun my sampling process- one slice of plain cheese pizza. Today was my first stop, Michelangelo’s in the Summerfield Plaza at Lakewood Ranch. When I pulled up, it was packed with people eating and picking up their orders, and the very busy employees behind the counter had the crowd control totally under control. So far, pretty New Yorky indeed.

The first bummer was that I couldn’t just order a slice at the counter and then go sit down to eat it. No, this is to-go or table service only. Womp womp. Well, ok. I decided to sit and order my one plain slice and a glass of water. It took much longer than I would have guessed- but I wrote it off to the crowded tables and the fact that I was only going to be paying a comparatively measly amount of money. I noticed that a lot of patrons had brought their own wine and glasses, and overheard the waitress explaining that the proximity of the restaurant to the daycare center behind it was the reason that they were not allowed to serve their own. The food on the tables around me all looked and smelled great, and it seemed that lots of people go there for meals other than pizza. I saw a few bowls of pasta, some different parmesans, some salads etc, that all looked good.

When my pizza finally arrived, It looked pretty darn good. Melty cheese, not too greasy, and piping hot. I had my first bite. Hmmm. Everything seemed to be on point…The crust was good- crisp and a little chewy, the cheese was good, melty and stringy, the sauce was good- fresh and tomatoey. But something was missing. Hmm. What is it? Oh! It’s FLAVOR. Ya. Not so much. I really couldn’t figure out why, but I ended up sprinkling on tons of oregano, garlic, and even salt- something I NEVER do, just to get it to taste like something. Sigh. This ain’t NY.

I was also really not thrilled that I had to leave a tip for one slice. I ended up spending about $3 instead of $2 and change. I would STRONGLY prefer being able to order at the counter like at most places.

Despite my less-than-awesome review of the pizza, I think I probably WILL go back. Next time, I plan to add a bunch of toppings on to the fairly decent platform in hopes of making it taste more like something. Anything. Until then, my quest for a good, straight-up, cheese slice continues.