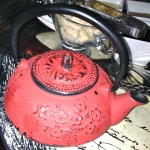 To call this evening a special experience would be a huge understatement. As someone who has Russian roots but minimal knowledge of the culture, this was an eye-opening journey of cuisine that I got to enjoy without even purchasing a plane ticket.

When Gabriel and I arrived we had our choice of seats in this very lovely restaurant. We chose the red velvet chairs near the windows and sat down for what was about to be a truly unforgettable dining adventure. As we looked over the menu, we quickly realized how little we knew about Russian food aside from blini and borsht and we decided to let our knowledgable waiter take the lead for us. The array of food that appeared was seemingly endless and in between 3 vodka cocktails each, we managed to eat an insane amount.

The pumpernickel bread with dill butter that started us off was wonderful. Fresh and soft with an earthy, nutty flavor. The creamy, whipped dill butter was impossible to not slather onto each slice.

Our first 2 appetizers were very traditional; red caviar blinis and the holodets. Neither of us had ever tried holodets and we were a bit wary of it at first. It looked frighteningly like the jelly that comes with gefilte fish and I’m not really a big fan of that, generally speaking. This was certainly unusual to me and I always say, I wil try anything twice. (I often don’t like things the first time around but they frequently grow on me). This was one of those cases. The first few bites were ummmmm, well, not my favorite consistency in the world…but the more I ate (in between sips of my delicious sour cherry cocktail) the more I liked it. It was enhanced with the sides of homemade horseradish and Russian mustard. Different indeed, and I have to admit, the sheer uniqueness of it in a world that consists of a ton of pizza, sushi and other familiar-to-me foods, was enjoyable. The blini were out of this world. Accompanied by awesome red caviar, sour cream, scallions and chopped egg, they were the perfect consistency and combination of flavors. The presentation was also really impressive, displayed on it’s own little wooden board. We polished them off in about 3 minutes.

The next courses brought out to us were our soups. I had the hot borsht with beef and Gabriel had the Ukha (Russian Fisherman’s soup). Each came with a side of bread- mine were 2 little wonderfully garlic-y rolls and Gabriel’s was a mushroom/fish cake. I didn’t love his soup- it was really just a basic fish broth which was a little too ‘fishy’ for me and not terribly exciting, but my borsht was phenomenal and went perfectly with the garlic rolls. At this point, our waiter brought out 2 homemade horseradish infused vodkas for us, garnished with a crunchy little gherkin. YUM.

Next we shared one entree, I’m not entirely sure what it was called because we let the waiter choose it for us, but it was basically a cutlet made from veal and chicken and fried. It was a bit on the greasy side and not my favorite flavor in the world, but the mashed potatoes and grilled fresh vegetables that came with it were awesome and I happily ate them all.

At this point we were pretty darn full but felt we just *had* to find room to try a traditional dessert. How could we skip a homemade halvah that the waiter promised was truly incredible? We couldn’t…and it was. It seriously changed my mind altogether about what halvah is. This was velvety, milky and cool, with the flavor of rich hazelnut and cashew and served with fresh berries and whipped cream. Excellent. I HIGHLY recommend trying this dessert if you’re like me, constantly ordering the chocolate option on any dessert menu. A great way to branch out without straying from creamy, rich, sweetness.

To finish our meal, we opted to try tea from the very cool lit-up tea box. We had fun opening each jar to have a sniff before deciding which ones to try. I had the lychee green tea and though I am probably still wide-awake writing this because of it, it was worth it. It was presented in such a glorious way in little cast iron tea pots with a sliver-wrapped glass that the waiter explained was how they serve tea on the trains in Russia. How cool is that? Alongside of our tea he served us condensed sweetened milk, brown sugar cubes, honey and cherry jam. What a wonderful treat this was- and a lovely way to sip our way to the end of this meal. Well, we *thought* it was the end until our awesome waiter appeared once more with yet another house infused vodka to try. This final one was made with a natural hazelnut and coffee infusion. I would never have thought that those flavors would work together but this turned out to be my favorite drink of the night.

Overall, I found Onegin to be a really fantastic restaurant. I recently read some negative reviews about it online and think they are totally unfair. I hope that the naysayers give this gem another try. It is honestly one of the most special dining experiences I’ve had in New York. Bravo Onegin, and thank you for an outstanding evening.

I SERIOUSLY miss this place. Total hole-in-the-wall…BEST shrimp pho you’ve ever had in your life. $5 gets you a bowl that is the size of your head. I live in NYC now and still catch myself dreaming about my favorite cold weather meal. Sometimes I’m tempted to rent a car and drive 2 hours just to go get some. Sigh.