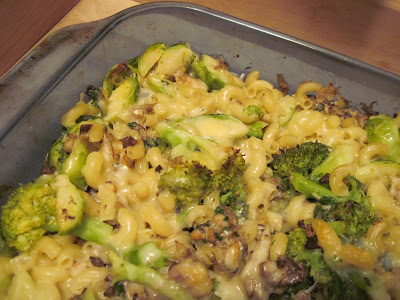 It’s one of those rainy, dreary NYC days where I didn’t really feel like doing anything except hanging around and cooking for the week ahead. I recently had a wonderful pasta/seafood dish at my friend Deb’s house, and I wanted to see if I could recreate something similar. I was just playing around with things I almost always have on hand (except for the crab which was in the freezer- not a common ingredient in my house at all) and this pasta bake surprised me and came out great. It will surely feed me well for a bunch of meals in the coming week.  I usually try to go heavy on the veggies and light on the carbs in this kind of creation, and it worked really well in this one. As always, my recipes are just concepts- meant to be played around with and loosely interpreted. 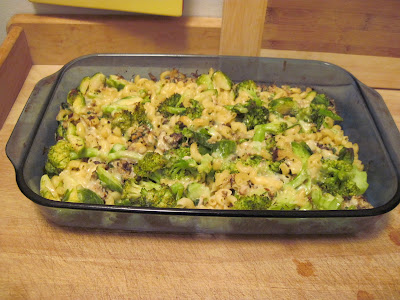 The quantities of the following ingredients are all according to your taste.
Pasta (I used elbows)
salt/pepper
olive oil
broccoli
brussels sprouts
mushrooms
lemon
wine
flaked crab
arugula
milk
gruyere
Cook some pasta and set it aside. Chop up some broccoli, brussels sprouts and anything other veggies you have laying around and steam them. Sprinkle with lemon, salt and pepper.
Lightly saute the crab and the chopped up mushrooms in a little olive oil. When they are almost done (2 minutes or so) throw in some chopped arugula just until it wilts. Add a splash or 2 of white wine (If you’ve got an open bottle in the fridge) and some lemon juice. Stir well and remove from heat. Add a little milk and about 1/2 cup of shredded gruyere or other cheese and stir well.
Combine everything in a baking dish and shred some gruyere or other cheese over the top.  Bake at 350 for about 30 minutes or until the cheese is bubbly and golden.
Enjoy! I REALLY did!