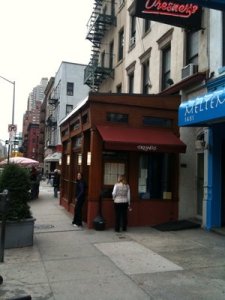 I’ve lived across the street from this place for almost 2 years and never went in…Strange, huh? I don’t know why, but for some reason the places that are closest to me are the most neglected. Well, my folks were coming in to meet me with short notice and we couldn’t get a reservation anywhere so we decided on a whim to give Dresners a shot..Especially because we had initially planned to eat at the greek place next door to it (called Rafini’s I think) but there were literally 2 people inside on a friday night at 8pm so we thought it was probably awful. Anyway, this is really a nice neighborhood spot. Don’t get me wrong, I wouldn’t expect downtowners to venture to the UES for it, but if you live in this hood give it a try…You’ll be pleasantly surprised. My mom had some AWESOME french onion soup. The entrees were all cooked nicely, not too buttery/oily, and very flavorful. The desserts that we shared were spot-on. I’ll definitely come back again now that I know it’s better than I had expected.