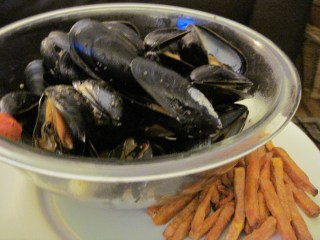 Fresh Direct was having a great sale on fresh mussels so I ordered some to make for dinner tonight. They came out perfectly. Light but very flavorful, super easy and fast to cook.  Here’s the concept:

Scrub a lb of mussels and throw away any opened ones that don’t close when you tap them. Heat up a little olive oil in a big cast iron skillet. Add some whole cloves of garlic (I used 6 cloves). Add some chopped grape tomatoes. Add some fresh or dried oregano. Saute that for a few minutes and then deglaze with a few tablespoons of lemon juice. Add about a cup of chicken broth and a half cup of white wine. Bring it to a boil, back down to a simmer and then cover with a lid for 5 minutes or
until the mussels are all opened.
I happened to have some sweet potato fries that I made a while ago in my freezer so I had those on the side with a lovely salad. It was pretty much a PERFECT dinner, and thanks to the sale at Fresh Direct, the whole thing cost me about $3. 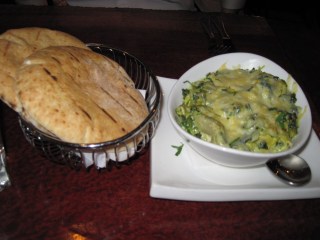 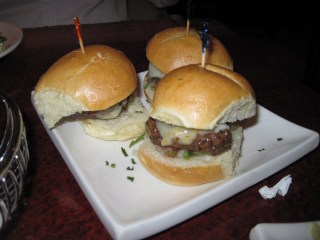 I bought a ‘Pay $25 for $50 worth of food/drinks’ coupon online for this restaurant and asked my dining pal to meet me for lunch. When I arrived, there was literally no one there except 2 people eating sandwiches. No one at the bar. No one at the hostess stand. No one. I waited for about 5 minutes and eventually the adorable bartender came out to seat me. After finding out how bad he is at his job, his adorableness faded pretty quickly. Harsh? Yes, but also true. He offered me a taste of red wine while I waited for my friend, which I accepted happily. That was pretty much the end of his attentiveness. For the rest of the meal, we had to constantly remind him that we’d ordered a glass of wine, a cocktail, an appetizer or a cappuccino. He hung out behind the bar ignoring us and the 2 other tables that now had people at them, texting on his iphone like a 16 year old at the diner table.
It quickly became clear that this restaurant probably offered the 50% off coupon because they are in grave danger of going out of business. They were out of about 6 items on the menu and apparently, as our waiter informed us, that’s very common.  We decided to share the sliders and the spinach/artichoke dip. The dip was actually surprisingly good, with big chunks of artichoke and not too much goo. The pita was fresh and warm and perfect to stuff with the dip. The sliders were ‘eh’. Fine, but certainly not worth any real praise. When we asked about dessert, we were told all they had was apple pie which we passed up, but 5 minutes later the next table over had a chocolate mousse. Hmmm. Weird. Anyway, the best part of our meal was actually the cappuccino at the end. Maybe because it was really a good one, but more likely it was because it signified the end of a not very good meal. Without the coupon and plus tip, this would have cost us about $55. Given the whole experience however, it wasn’t even worth the 50%.