I’d been meaning to try Flex Mussels for a year or so, having walked past it a number of times. It looks really cool as you pass by with it’s sleek, hip bar entry. A friend and I decided on an impromptu dinner around 9:30 on a Friday night, and the place was totally packed.
It’s a hopping scene with a young, hip looking crowd. It has more of a village-y feel than uptight-uptown, which is a good thing. We were lucky enough to score an outdoor table and were seated quickly. Bright green chairs at pressed tin tables extended the feel of the modern bar area to the small outdoor section. There is, by the way, a pretty good sized seating section in the back, which you don’t realize when you are at the narrow bar. It’s a bit odd though, the decor feels like a different place altogether. Still pretty and welcoming, just strangely different.
We were offered flat or sparkling water free of charge, which I thought was a nice touch.  The menu is exhausting, but in a very good way. There must be about 25 different sauces/broths/stews to choose from and almost all them sounded appealing. Good thing we both like to share plates. Our waitress, Carly, was awesome. She knew the menu cold, and was more than happy to engage in conversations discussing it. We went for the south pacific first- a very light summery broth with flavors of lime, lemongrass, cilantro. A piping hot pot was placed before us and steam came pouring out when the lid was removed. Really, an impressive presentation.  While it was not as bold of a flavor as we expected, and actually needed a little salt, it was the perfect first course where we could really just taste the freshness of the mussels without them being overpowered by a heavy sauce. It tasted stronger toward the end of the pot, which makes me think maybe we should have let it sit for a little bit while we ate our salad. The spicy salad was incredible, and I’m terribly sorry that I forgot to take a picture of it. Arugula, fennel, awesome quality very razor thin slices of Parmesan and a peppercorn vinaigrette. We also shared a side of hand cut fries and they were just the way I like them, very thin, with the skin on, hot and crispy. We were still hungry and decided to order a second pot of mussels. We decided we wanted a bolder flavor and on Carly’s suggestion opted for the lobster bisque. It was rather exciting to see the many larges chunks of lobster on top of the mussels when the lid was removed this time. This was maybe the best pot of mussels I’ve ever had. The sauce was much broth-ier than I expected with just a touch of cream- not at all heavy.  The lobster pieces were generous, and cooked perfectly. The flavor that seeped into the mussels was seriously delicious and I think I might have to go back for more soon since here it is, only 24 hours later and I’m already craving them.
And now, for the dessert portion of our evening. I could write a whole entry just about this dessert it was so amazing. I did a double take when it was placed on the table. The picture really doesn’t do it justice so I will do my best to explain. The bottom layer is graham cracker cake, above that is frozen key lime filling with whipped white chocolate. On top are 8 flawless blueberries sprinkled with gold dust. The whole dish sits in a shallow pool of raspberry sauce. Now I am normally an ‘if-there’s-chocolate-on-the-dessert-menu-that’s-what-I’m-getting’ kind of woman, but this was a wonderful time to stray from that rule. To enhance the experience even further, right before my first bite I happened to overhear the pastry chef who was hanging outside with some friends, say he’d conceived the dish. Apparently, this charismatic young chef Zac Young, will be on Top Chef Desserts next season and based on this sample, I’m SURE he’ll be a tough one to beat. Keep an eye out for him. 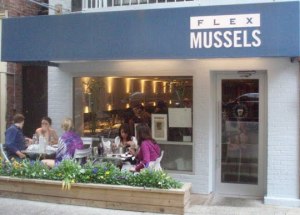 As an adorable final touch, we were given a couple of Swedish Fish with our check. There is no question in my mind that I will be coming back with friends and making this one of my neighborhood favs. Now that I know there is a $20 all you can eat mussels special from 5-7pm, I’m guessing I’ll be back sooner than later.