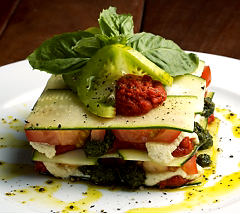 I’d been meaning to try Pure for a while..mostly for the novelty of the whole raw food movement…something that I understand and respect, but could never really stick to. I met a friend for dinner at 6:30 on a Wednesday night and we were one of 3 tables with people in the whole restaurant, which made me feel a little guilty that we were just sharing one app and one entree. Anyway, while the menu was quite appealing sounding, none of the dishes that we were leaning toward were recommended by our waiter so we tried others…Overall, it was interesting. Great presentation, and very unique flavors…but the flavors were all VERY strong and really competed with each other more than they complimented each other. For what it was, it remained kind of a novelty of a meal, but the prices made it less than fun. We skipped dessert after we nearly passed out at the $17 price tag for one. I mean, c’mon. You don’t even have to pay for gas or electric ovens!! Shouldn’t that keep costs down?? Our one entree and one appetizer (which left me feeling hungry enough to go get a cupcake for $5 at whole foods) came to $56 including tip. Seems rather ridic, no? I will not be going back. I should mention the one saving grace (aside from my awesome company) the service was impeccable. Friendly, attentive, not too-in-your-face, quick to refill low water glasses, and very helpful with advice and suggestions.